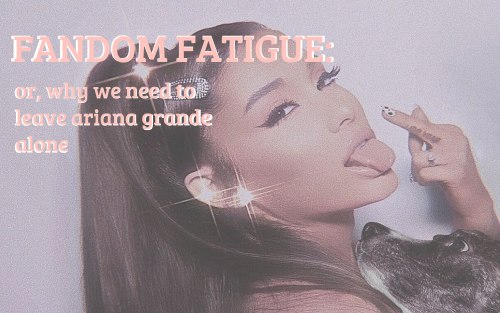 I come to you today, friends, with a simple and somber request: can we leave Ariana Grande alone, for like, a month? Two months? Can we just, collectively, chill about Ariana Grande? And while we’re doing that, can we calm down about You Need To Calm Down? Also, can we not air animated scenes of real life musicians having sex on HBO shows? Oh, just really quick on top of that, can we not send death threats to teenage girls for dating your teenage boy idol? And, just one more thing, I promise, but can we not call someone trash for not publicly mourning the death of a close friend and former co-star? I know that might be a lot to take in, but I think, if we all behave like human beings, we will be able to accomplish this.

Fandom has gotten out of control. I propose we burn it to the ground and start it over again. Let’s rebuild what could’ve been great instead of riding this burning ship straight into the ground at breakneck pace. Let’s get into this.

Well, my beginning. Fandom as a whole has been around longer than I have, but I’m only writing about my experiences here, not doing a historical deep-dive, because this is my blog, and I can do whatever I want to. I began on LiveJournal.

Now, when I was a tweenage girl getting very into television shows, reality singing competitions, and also puberty, I discovered fandom when many like me did in the same place. LiveJournal. Nowadays LiveJournal exists as a relic of its older self, with most fandom spaces long since vacated, but at the time, it was the hub for getting yourself involved in whatever passion you felt attached to. Wanna write Batman fanfiction? There were communities for that. Wanna talk about how Dr. Wilson from House would be your ideal husband? There were communities for that. Wanna talk about how the feud between My Chemical Romance and The Used was all a marketing ploy because their record labels thought it would sell more albums and they’re all still totally best friends, you guys, they HAVE to be, right? There were communities for that, and just about every other niche interest you could possibly have.

LiveJournal communities were member-only, and although most of them were not particularly elite about who they let in, it wasn’t a free-for-all. Mostly. And even when it was, people were terrified of being sued.

Now, I was 13, and I didn’t know who would be suing me or why they might sue me for writing a story where the Joker took me to prom, but there was a constant sense of “We have to keep this between us.” Fanfiction had disclaimers at the start and end of every post begging that the story not be linked elsewhere, and the idea of the people our fandoms were centered around finding out about what we did in the shadows was one we lived in constant fear of.

One time a YouTube comedian I had a blog about found my blog and tweeted about it. He didn’t say anything negative, and he wasn’t mad about it existing, but I was so mortified that I deleted the account and never spoke to any of the LJ friends I had on there again. That’s where we were at.

Obviously, not everyone was like that, but LiveJournal felt insular, and connected, and something you had to know about to be a part of. This is where I think fandom in general made a mistake.

There are reasons that fandoms migrated away from LiveJournal, and there are other places they went before Twitter, but I’m trying to keep this one fairly short, so here’s a quick summary: LiveJournal sold out, everyone went to Tumblr, Tumblr sold out, fandoms split into groups, half went to AO3, and half went to Twitter.

AO3 is a really amazing website called ArchiveOfOurOwn, where people work tirelessly to make sure that fanfiction writers have a place to upload and store all their written work for free. Now, there’s not really a forum or community on AO3, because it’s just an archive, so the people whose main focus was creating fandom works tended to form communities on other social media sites, like Tumblr or Twitter. They’re not really the ones I’m talking about here, but like anything, there is overlap.

What I really want to talk about is stans.

Stans are twitter-based, largely, and have gotten increasingly problematic. No, not in a woke way, but in a legitimate, “this is a problem” way. The name itself comes from the Eminem song “Stan” about a stalker-fan of Em’s who is too obsessed with the rapper and ends up committing a murder-suicide out of devotion to him. You know, normal stuff people want to be associated with.

Twitter fans of artists adopted the term along the way, and it became shorthand to mean that you’re a really big fan of someone, or something. There are KPOP stans. There are Ariana stans. There are (or were) One Direction stans. Superfans existing, communicating, and participating in fandom behaviours isn’t really the problem. The problem comes from the lack of objectivity.

I’ve written at length about the dangers of over-obsession before, but the unique problem with stan Twitter is that the people being stanned must become part of the community. They’re on Twitter. They see what we’re saying. We tag them in tweets, we try to get into their DMs, they start to talk like us, they’re basically our friends, we’re entitled to their attention and love and friendship and this is AMAZING. Except for when it’s not.

People feel entitled to a lot about their favourite celebrities, and they’re starting to expect them to behave just like all their friends online. When they grieve, we want them to grieve with us, publicly. When they’re happy, we want them to share their happiness with us, and let us in on the intimate details of their life. When they break up with someone, or start dating someone we don’t like, we feel entitled to shit talk the way we might with our friends, despite having no idea who these people are or what they’re really feeling.

Ariana Grande’s had a tough year. From the Manchester attack, to the death of Mac Miller, to the breakdown of her engagement, and the eventual tide of public favour shifting against her, it’s not easy being Grande. Some criticisms of her are earned, and others are not, but regardless – is it any of our business?

Why, after breaking down in tears onstage twice in the past two months, does Ariana Grande feel she owes her fans a letter of explanation? Why have people on Twitter created endless theories to explain her behaviour, endless looping gifs of her public grief, endless Twitter threads tagging her in constant posts trying to get her to acknowledge our sympathy for her?

Disney actor Cameron Boyce just passed away. I was writing an article about this for my work, and happened upon his sister’s Instagram page. I noticed her tagged posts were filled with fan posts grieving Cameron. Why did these fans feel the need to try to force his sister to share in their specific grief? What is gained from her phone blowing up with notifications as a constant reminder of the tragedy in her life?

When Louis Tomlinson’s mother passed away, he wrote a deeply personal song about his grief called “Two of Us.” Shortly after the song was released, his younger sister also passed away. Fans began trending #ThreeOfUs on Twitter, making the decision without any input from the one affected to combine these tragedies, to force Louis to now grieve both losses in public without any thought for what seeing that trend must have felt like for him. He, like Cameron Boyce’s sister, was endlessly tagged in memorial posts immediately after the loss of his family.

You know the old criticism of baths that talk about how you’re just sitting in a soup of your own filth? Fandoms can be a bit like that sometimes. The problem with the way fandoms have evolved into standoms is that we are trying to drag our idols into our bathwater.

I don’t think fandoms are a bad place. I don’t think fanfiction writers are weird, or creepy. I don’t think it’s wrong to form communities and bonds based on our interests. I just think the bath is overflowing. The only way out is to gut the bathroom and start again.

Come on, let’s all make LiveJournals again. I promise I’ll add you as a friend. And, best of all, Ariana Grande will not.